What if it were true? What if you were connected to this vast, invisible, vibrating, conscious energy field? The universal mind. Source energy. Divine intelligence. The quantum field. Or what some call God.

What if quantum physics were right? What if you were powerful beyond measure? What if you could be, do or have anything? 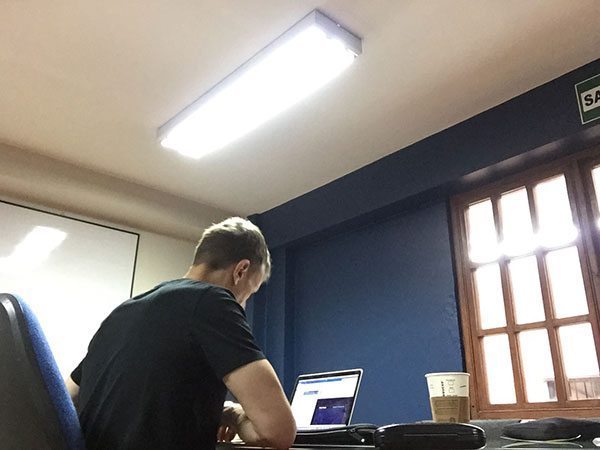 From the 1988 hilarious Christmas comedy Scrooged based on Charles Dickens’ novel A Christmas Carol, Bill Murray plays Frank Cross, a bitter, cynical television network executive, who on Christmas Eve after being visited by three ghosts, joyfully shouts out “I get it now!”

“. . . it’s the one night of the year when we all act a little nicer, we, we, we smile a little easier, we, w-w-we, we, we cheer a little more. For a couple of hours out of the whole year, we are the people that we always hoped we would be! It’s a miracle . . . I get it now! . . . If you believe in this pure thing . . . the miracle will happen and then you’ll want it to happen again tomorrow . . . It can happen every day! You’ve just got to want that feeling! And if you like it and you want it, you’ll get greedy for it. You’ll want it every day of your life, and it can happen to you! I believe in it now. I believe it’s gonna happen to me now. I’m ready for it! And it’s great. It’s a good feeling . . .”

I’ve always loved this lighted-hearted interpretation of the holiday classic. And no matter how many times I watch it, the ending with Frank Cross shouting to the world “I get it now” always gives me goose bumps and fills me with this overwhelming sense of hope and belief in our ability to connect with something that is much greater than our physical selves.

More than a century ago, scientists made a mindboggling breakthrough proving what spiritual teachers and ancient texts have embraced for thousands of years:

The universe and everything in it is pure, vibrating energy.

That’s right, everything. From the physical to the non-physical, from the seen to the unseen, you, me, the universe, and everything in-between, are all made up of the same stuff: energy or light.

What was previously believed about atoms, matter and all physical things was turned on its head by quantum physics. Simply put quantum physics is the study of tiny, invisible particles of matter. So what happened when quantum scientists drilled down beyond atoms, particles or matter? They found subatomic particles. And when they looked beyond subatomic particles? They found energy. Pure, vibrating energy. Hence, the amazing world of quantum weirdness was born. The lines between science and spirituality were forever blurred.

It all started with Max Planck, considered the father of quantum physics, who determined that waves of energy or light are not one continuous wave, but are tiny packets of vibrating energy that he called quanta. So now energy waves could be looked at like particles: discrete lumps of something. Then Albert Einstein followed with his breakthrough that all matter is energy. Finally, it was Niels Bohr and a group of other quantum pioneers that came along and proved that energy can be both waves and particles, but not both at the same time. Now that is weird. This quantum weirdness is called wave-particle duality.

“If Quantum Mechanics hasn’t profoundly shocked you, you haven’t understood it yet.” — Niels Bohr

As a wave, subatomic particles can take every possible path at the same time. In other words, this energy can be waves or particles until observed. The staggering conclusion is the stuff you are made of is essentially an infinite wave of possibilities in a quantum field of pure potential. And only when you focus your attention on this wave of energy with your beliefs, thoughts and expectations, do all probabilities collapse and matter is formed. You literally create your own reality with your consciousness. This isn’t magic. This is science. The universe and everything in it only exists, because you as part of the quantum field of energy, think it into being.

With this discovery Newton’s theory, describing everything in the universe as solid matter and moved only by gravity, was debunked. The way the scientific world would look at atoms, the building blocks of all things in the universe that are both physical and non-physical, would never be the same.

We now know that atoms are made of smaller subatomic particles. These subatomic particles are made of something even smaller called quanta. And finally, quanta are packets or discrete waves of vibrating energy. So you, me, the universe, the stars, plants, animals, sound, wind, thoughts, laptops—you get the idea—are all made of the same stuff. We all come from this one source of energy. The quantum field of energy.

We now know that this this energy is wave forms of probability in an infinite field of probabilities. And that physical matter doesn’t exist, but shows tendencies to exist until observed. Our thoughts or consciousness create and have created all things in our reality including the universe we live in. This can only mean the quantum field of energy is a connected, eternal, omnipresent consciousness. An infinite source of pure potential of every seen and non-seen thing, thought, belief and intention that ever is, was, or will ever be. A divine consciousness where everything that exists is a product of your thoughts. An infinite universal mind that each and everyone of us is connected to and has at our disposal.

But how do you know you are connected? If the weirdness of wave-particle duality is not enough to convince you, let’s look further into quantum weirdness with what scientist call entanglement. But first let’s review one more time what you know so far. A drop of water, the ocean, nature, wind, thoughts, iphones, your body, your senses—everything and I mean everything—is made of the same energy. All physical and non-physical things are made of atoms. All atoms are made up of subatomic particles. All subatomic particles are made of pure energy. One vast source of energy. These waves of energy are probabilities until acted upon by your beliefs, thoughts and expectations. Once acted upon or observed, they attract other particles of energy with the same vibrational match, from the quantum field of energy, and form the things you see in your reality. You literally create your own reality.

“All matter originates and exists only by virtue of a force . . . We must assume behind this force the existence of a conscious and intelligent Mind. This mind is the matrix of all matter.” — Max Planck

Now, back to entanglement. Entanglement is what Einstein referred to as “Spooky action at a distance.” Scientists discovered that when a particle is split into two and then separated by large distances, and it doesn’t matter how far, what you do to one particle instantly affects the other particle. As if they are instantly communicating with each other. But wait, we learned in school that nothing can travel faster than the speed of light. So what’s going on? The only conclusion is they don’t need to travel to communicate. They are entangled. Atoms, subatomic particles and the energy that comprises them, are all infinitely connected. Which means you, me, the universe and everything else, are all infinitely connected. We are all entangled. Spooky indeed.

There is much more. So much more. But this is a good start. You now know the physical body you occupy that is made of cells is more than just a lump of solid matter. Cells are molecules. Molecules are atoms. Atoms are subatomic particles. And subatomic particles are pure vibrating, energy or light. Even more powerful are your beliefs, thoughts and expectations. They too are made of the same pure, vibrating energy of the universe, but carry a much more potent vibration. Like all matter and non-matter, they carry a unique vibrating frequency that attracts other packets of similar vibrations that join together to create matter, things or your reality. You come from the same source of energy that creates worlds. You are a powerful creator. This isn’t fantasy. This is science.

As Frank Cross in the movie Scrooged happily declared, “I get it now!” Happiness, abundance, and success are not random events, luck or happenstance. On the contrary, all of that and more is available to you. It’s your divine right. Let me be clear. You are powerful beyond measure. However, it has also been said, “With great power, comes great responsibility.”

LOGIN or REGISTER with us to join the discussion

The Oracle Made Me Do It
Scroll to top